Bee Ecological: How To Save The Bees By Creating A Pollinator Haven In Your Backyard

Wasps give their fuzzier, buzzier cousins a bad name. Because of their propensity to sting, bees have historically suffered a bad rep. I’m not an official tree hugger (or indeed bee hugger) as yet, but I do think we ought to make a concerted effort to save our bee population.

Without bees, we wouldn’t live a very fruitful life

Bees pollinate the world’s food crops. This means, without bees we wouldn’t be able to sustain the production of much of the food and beverages in our modern diet. Or, put in a more comprehensible way:

We probably wouldn’t have wine (or beer).

There. I said the unspeakable.

The extinction of bees would pose an extremely grave threat to our economy, food supply and essentially our survival. In the somewhat prophetic words of Albert Einstein; “Mankind will not survive the honeybees’ disappearance for more than five years”. So with that in mind, I think it’s worth any level of time and effort to help save the species that pollinate around 70% of the world’s essential crops.

Numerous factors have contributed to the declining bee population, but a reduction in wildflower meadows, which decreased by 97% between the 1930’s and 2013, have arguably been a key factor in the UK particularly.

Not wishing to be destined for a life of cuppa soup and other manmade fibres, and hoping to do my bit for the humble bumblebee, I set-up my own pollinator haven in my (modest sized- might I add) back garden.

This may prove a challenge for me. Not renowned for my green-fingered abilities (I once struggled to keep a cactus alive), I am hoping to fashion a mini-meadow using some of the pollinator’s favourite plants. 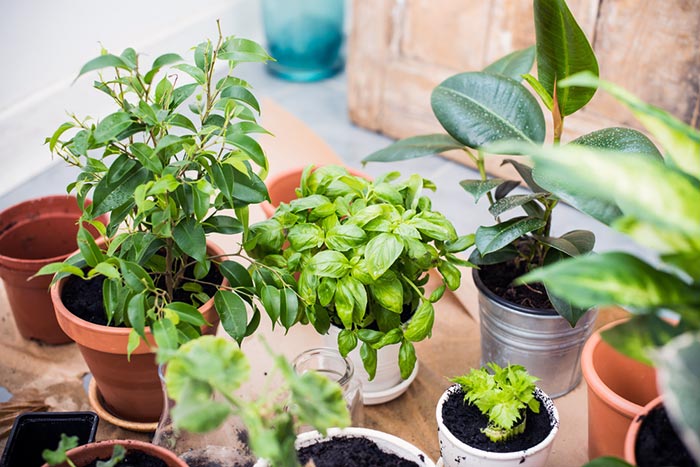 Having researched some of the best (and also low maintenance plants) to attract bees and other pollinators, I discovered that bees seem to like some of the same plants we Homo sapiens are keen on. So it turns out that planting your own handy herb supply has a dual purpose?

With this in mind, I’ve come up with my top five herbs and flowers to grow in your garden, on the roof terrace, in window boxes or hanging baskets, that could help support our essential pollinators, some of which might come in handy for you too:

Also known as wild marjoram, oregano makes a frequent appearance in some of my favourite pasta dishes, so I’m looking forward to harvesting the ‘real deal’ as opposed to rummaging through the spice rack. It’s grows best when planted in March, with plenty of direct sunlight and doesn’t have a great survival rate in winter.

The perfect flavoursome addition to the turkey stuffing, this popular herb is also a favourite of the bee. Sage prefers to grow in conditions with plenty of sunlight and organic matter.

This pretty blue flower, also known as the geranium, will add a little extra colour to any make-shift pollinator meadow. Pollinated by a large number of bee species including the short-tongued bumblebee, long tongued bumblebee, the solitary bee and the honey bee, this is the perfect power-flower for pollinators.

Arguable the most popular and versatile herb of them all, rosemary is also a great plant to have in your garden to support key pollinators. Rosemary bears blue and white flowers in spring and is best grown in good quality soil with ample sunlight.

Often used as a natural remedy against insomnia and anxiety, Lavender has to make my top five. Best grown in well-drained soil and sunny, sheltered conditions, Lavender was also revealed as one of the most popular garden plants among bees.

While I have selected my top five on the basis that most are also helpful to us humans, it’s important to make bees the number one cohabiting partner. It’s vital now for us to club together to help cultivate and nurture an ecosystem suitable for bees, because without them, life wouldn’t be much fun.