Up to Half of the World’s Food Goes to Waste. It’s Time To Act…

The U.S. is a land of abundance. Such abundance, in fact, that somewhere between 31 and 40 percent of food goes to waste. And yet by 2013 figures, almost 50 million Americans lived in food-insecure households, and starvation is still happening in developing countries.

Clearly, there’s a distribution problem here. And, since food travels an estimated 1,500 miles, on average, to the consumer’s table, it’s not a transportation-distribution issue.

That said, some of the best solutions to avoiding food waste and getting that food to the people that need it have been localized solutions. For example, the mayor of Galdakao, a small town near Bilbao in Spain’s Basque country was amenable to the idea of a community refrigerator. Restaurants send their leftovers there, community gardens and individuals donate fresh produce; some people even prepare food specially for the refrigerator. Anyone in need may take what they want from it. Volunteers ensure it stays clean but say it’s so well used that nothing goes bad. A whole lot of food that would have been dumped helps the unemployed and the hard up to get along.

In unfortunate contrast back at home, an unofficial (and unsanctioned) experiment with the same idea by some UC Davis students got shut down. Davis is located in Yolo County, California, home to dozens of small organic farms that produce great food year round – a perfect place to start such a localized redistribution effort – but concerns over food safety, regulations and all the other prejudices you might expect some people to hold around the idea of poor people traipsing through their neighborhood in search of free food, meant that this idea was ahead of its time – here, at least.

One of the concerns was around food safety/sanitation. And according to a 2014 survey, concerns about safety and freshness are at the top of the list of reasons why Americans throw away so much food. Produce, inherently perishable, tops the list. Canned and boxed goods past their expiration get tossed as well.

Some of this really is a problem of abundance. If you can go buy another bunch of kale cheaply, whenever you want it, perhaps you feel less motivated to trim off the yellowed parts and work with the rest of it. If you don’t know when, or even if, you’ll be able to get more kale, you’ll be sure to work with what you’ve got. And then perhaps you get paranoid about food “going bad.” It’s worth knowing that best-by dates are generally worst-case, and that most food is just fine quite a way past that date. Similarly, fruits and vegetables are surprisingly durable if stored correctly, which means kept cool and not waterlogged/sweated.

Waste by abundance happens before the food even makes it home, too. There’s a perception that people will only buy perfect-looking produce. And so growers and produce distributors often simply toss whatever isn’t perfectly spherical and evenly colored. A useful secret: Blemished fruit is often the most delicious fruit, and blemishes on veggies don’t tend to be systemic; i.e. you can cut out the affected portion and the rest will be fine.

If a third of food produced in the U.S. gets wasted, that means that a third of the resources used to produce the food were also wasted, including land, seed, care and maintenance, hours of work, and processing and transportation time and cost. That’s not a sustainable way to keep an economy going, and it’s definitely not responsive to supply and demand.

Also of concern is what happens to the waste. If compostable food is composted, it’s ultimately helping to build soil and can perhaps be considered as not really wasted even if it wasn’t eaten. But if compostable food goes to the landfill and rots there amid the trash, that’s when methane gas gets produced in large quantities, which is bad for the environment both immediately and long term.

It’s easy to be apathetic about waste when we see such abundance, but wastage of food isn’t a neutral phenomenon; it’s detrimental. 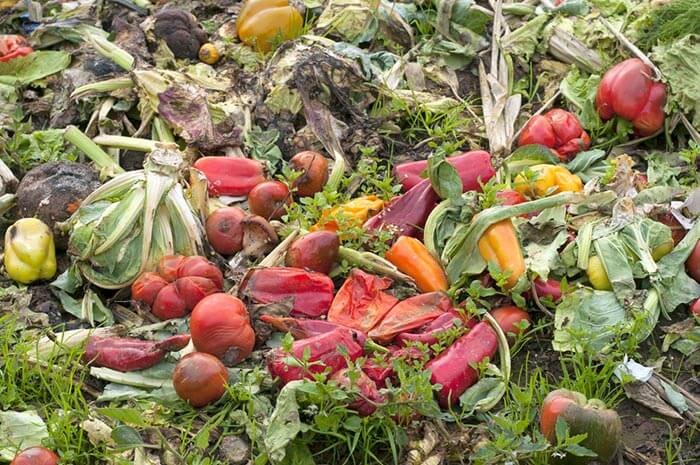 What Can I Do About It?

It would be great if those 1,500-mile food-distribution heroes could take care of all this and redistribute food so that the food-insecure have food on the table. And it would be lovely if perceptions about expiration dates and not-quite-spherical peaches would change, and if all day-old produce went straight to homeless shelters.

And some of that is happening, like at the Daily Table supermarket, in Dorchester, near Boston, Massachusetts, which sells food nearing its expiration for steeply discounted prices, and which also happens to be a not-for-profit.

Perhaps more of that will happen, but we only have leverage to make change within our own homes and communities. Another good example comes from Europe, in Berlin, Germany there’s an organization called Food Sharing, where users post if they have excess food and invite people to come pick up. Obviously a lot of mutual trust and goodwill is involved, as with other local-based socially organized systems like Uber.

It might be harder to make something like this fly in America, but you could start by asking yourself what your widest possible recipient group is for the food that you buy. Do you have friends/families/neighbors you could share excess with? Or are you ready to create a relationship with an individual or organization to which you can donate excess?

If this is a distribution problem, then the most immediate and clear-cut way to address it is through community and social networks. It’s easy to take food for granted when it’s so abundant, but if we treat food with the same respect and love as humans learned to do when food was scarce, we’ll digest it better, appreciate it better, and through sharing it appreciate each other better.

When it comes to shopping habits, if the goal is to avoid waste, it’s good to be clear on why you buy what you buy. Do you tend to stock ingredients for specific recipes and follow the recipe exactly? Or do you prefer to buy what looks good/is in season/on sale and improvise around that?

If you’re more of a recipe follower, you might not do so well with a CSA box, which contains different produce items each week, some of them potentially unfamiliar to you, or picking out whatever looks exciting at the farmers market. The enticing but unfamiliar fractals of Romanesco, for example, so attractive at the farmers market, might only seem weird and out of place at home, and it will probably end up thrown out.

You’re probably better off researching before you buy, so that you’re excited to use it and have a plan for it rather than feeling reproached and defeated by its presence in your refrigerator.

But if you’re the type who looks at the Romanesco, nibbles on a floret, and says, “Wow! That’s somewhere right in between broccoli and cauliflower. I want to try roasting that with onions, squash and green beans with a balsamic reduction,” you’re probably more in danger of buying too much overall, carried away by the beauty and bounty. 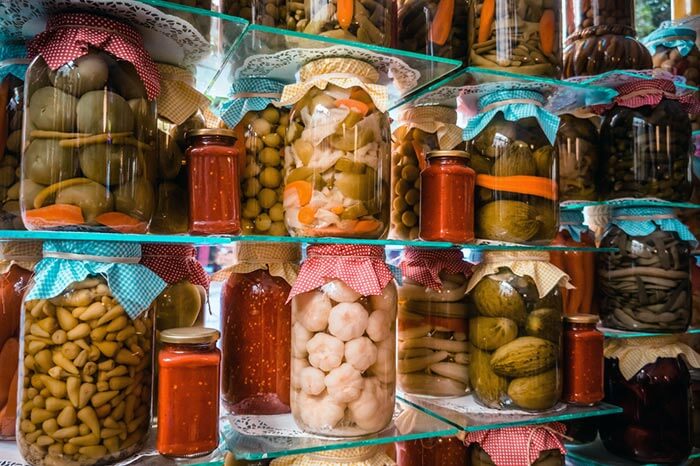 If you fit this profile of food shopper, you should consider having a captive audience to cook for, or giving yourself a limit on how much to buy, even if it’s beautiful, or become well-versed in food preservation methods.

Actually, second only to sharing and distributing, preserving food is the best way to avoid waste. “Preserving food” can mean leaving leftovers in the fridge for tomorrow or the next day. Or it can mean freezing a bunch of berries and veggies, or freezing a large batch of soup, stew, etc., in individual portions. Or it can mean fermentation – saving the season’s veggies by making kraut/pickles/kimchi, making yogurt out of milk, making vinegars or wines or ciders from excess fruit. Or it can mean dehydrating. Done right, dehydrating will preserve all kinds of food – fruits, veggies, meats, grains, prepared dishes – for a long time and, packaged and stored properly, with little nutrient loss.

Admittedly, all these methods are more time consuming than simply throwing the food in the trash (except putting leftovers in the refrigerator might save you washing a dish that night). They take a commitment as well as a little bit of a learning curve to do them correctly. But the end products are highly satisfying and valuable, and they prevent a lot of waste.

And see if your area has an organization that gathers excess backyard produce and redistributes it – and if there isn’t one, think about creating one. Examples include Village Harvest in the San Francisco Bay Area, Food Forward in Southern California and Iskashitaa in Tucson, Arizona.