Is your refrigerator running?

Well… then you’d better catch on to the contribution you’re making to a convergence of global crises brought on by the greed and improvidence of two major industries poisoning the population, advancing climate change, benefiting from systemic poverty, destroying the soil, invading politics, and generally making a muck of what used to be our simplest need: food.

Our issues with the way we eat scale all the way to the top of the food chain… but they start in your refrigerator.

You see, there are a few things you’ve got to understand.

Humans have always died. We know that.

It’s just that they used to die from infections, poor sanitation, and communicable diseases.

Now? 71% of all deaths on the planet are caused by chronic diseases… which are mostly caused by diet.

That’s why my good friend, Dr. Mark Hyman, set his nose to the grindstone to find the solution. The result is what he considers “the most important book [he feels he has] ever written. It’s about the single most important and overlooked issue of our time.”

But it also confirms it as the solution.

Climate change, the obesity epidemic, the rising healthcare costs as a result, the unethical treatment of workers and animals…

These problems don’t exist in a vacuum.

And when Hyman started looking into the economic, social, political, and personal impact of our food system, he found more than he bargained for.

For example, the number one factor contributing to the rise in chronic disease is a lack of fruits and vegetables. Yet only 2% of America’s industrial farmland is allotted for the purpose of growing them.

The other 98% is used to grow commodity crops — crops subsidized by the government. The main 3? Corn, soy, and wheat. The exact crops making everyone sick.

Then he dug a little deeper…

A Most Profitable Web

And he found that obesity rates in children have tripled since the ‘70s — one in three children is overweight or obese. It’s easy to market things to children, it turns out. That’s why Coke and McDonald’s spent $1.8 billion marketing to children as young as 2 years old every year.

But not just any children…

And that’s across the board for minorities. Type 2 diabetes rates have tripled in Native American children, doubled in Black children, and increased 50% in Hispanic children. It is a form of apartheid when the poor and minorities live in areas that lack affordable healthy food and have an overabundance of fast food outlets and convenience stores.

Marketing to children affects our low global standing in academic performance. We are 31st in math, reading, and sciences in the world.

Well… brain development is the worst in poorer kids, who also have the worst diets and brain sizes 10% lower.

This documented phenomenon — poor school performance in kids who face health issues, consume poor diets, are obese, and are often diabetic — is called the Achievement Gap.

And the foods these kids are being fed are generally reconfigured edible arrangements made from corn, soy, and wheat.

Which raised a lot of questions for Hyman about regenerative farming and avoidance of feedlot animals. The thing is…

Without animals as part of a holistically managed farm system, you can’t build a robust ecosystem without strong soils. We’ve lost a third of our topsoil already…

No soil means no food and that means no humans.

According to the UN, 2 of the 5 million degraded hectares around the world need $300 billion (or 60 days of our global military spend) to support regenerative agriculture — which would stall climate change for another 10-20 years.

So What Do We Do?

Over the next 35 years, we’ll end up spending $95 trillion on direct and indirect healthcare costs because of our chronic diseases caused by bad food. 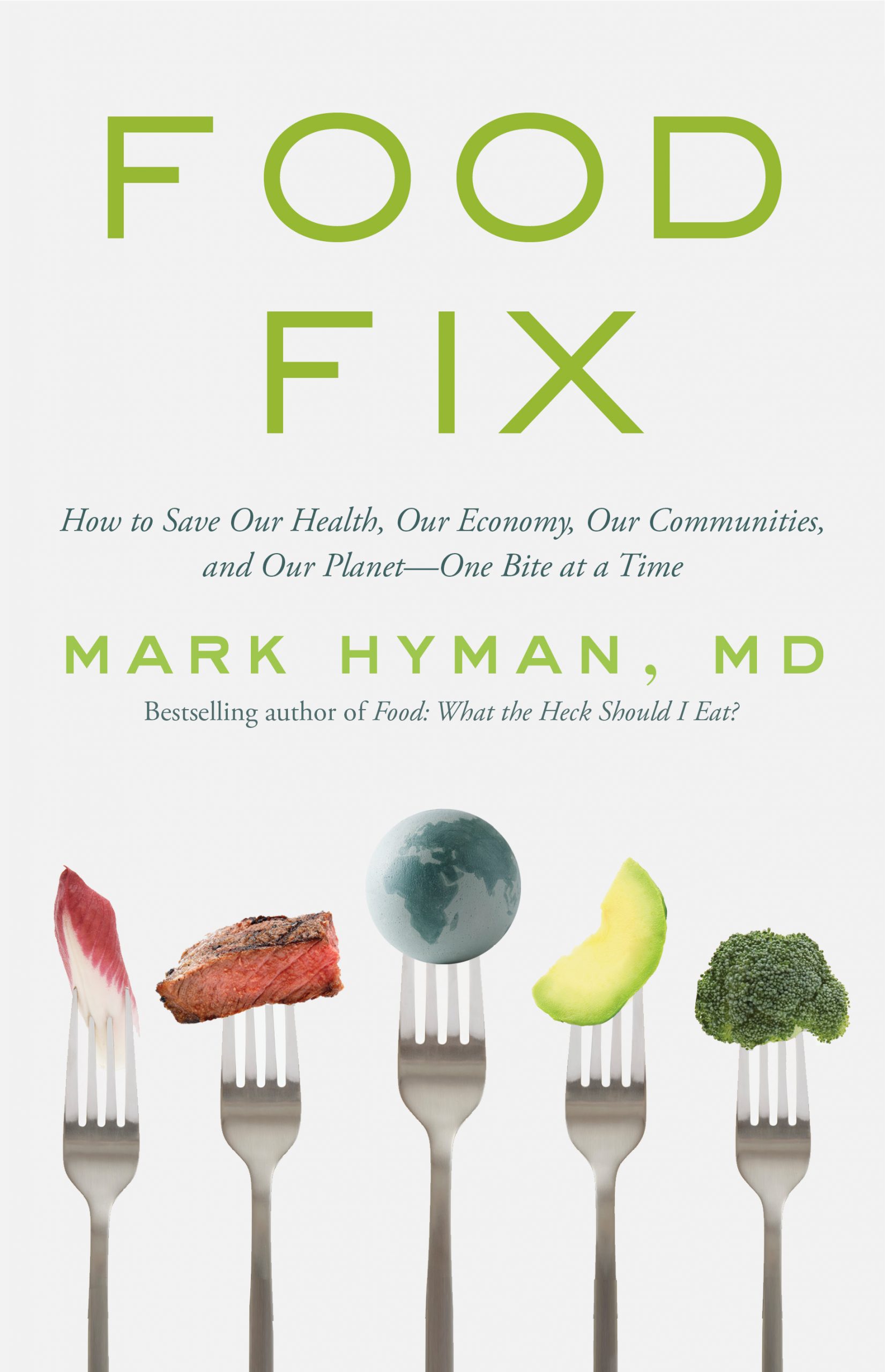 The second step? Read the book. Educate yourself.

Inside, you’ll find actionable ways that you can lead by example in your community, in your family, and within yourself…

Like ways to support regenerative agriculture and sustainable food, or how to avoid commodity crops, or how to end personal and community food waste, or how to grow your own food.

You’ll also find avenues to stop the reach of Big Food and Big Ag. Did you know that SNAP, the food stamp program, is responsible for 20% of one of the biggest global soda company’s annual revenue?

But it isn’t too late. Take the call to action. Start with a single step — read the book.