Since 2006, commercial beekeepers have been seeing devastating declines in their hives’ health and longevity. Whereas it was considered normal to lose 10 percent of one’s hives over the winter hibernation, since 2006 the figures have been from 30 percent up to 100 percent in a bad year. Aside from being terrible for the beekeeper’s business, this death and decline also spells decline for many key crops that rely on the bees for their pollination – crops such as almonds, apples, blueberries, cantaloupe, cherries, cranberries, cucumbers, strawberries, pumpkins and watermelons, to name a few.

Let’s stop and look at what’s wrong with this picture.

Honeybees make honey. That’s the first thing you associate with them, right? That’s why they’re called honeybees; their scientific moniker Apis mellifera also literally means “honey-bearing bee.” They make honey by visiting nectar-producing plants, gathering the nectar and bringing it to their hive. In the hive, designated worker bees evaporate the nectar from 80 percent water/20 percent sugar to the reverse, 80 percent sugar/20 percent water. This evaporated nectar, called honey, with protective plant chemicals suspended in it, is so stable that honey found in ancient Egyptian tombs was still edible after 1,100 years. Bees also gather pollen from flowers, not always the same as the nectar flowers, and store and consume it as their protein source.

In the course of gathering nectar and pollen, the bees incidentally pollinate the plants, consummating the plant lovemaking of pollen from male stamens onto female style that allows fruits (offspring) to be formed. It’s an ancient win-win symbiotic pact – the bees get their food; the plants get pollinated.

Normally, bees live in one spot, in their highly organized hive/colony, and cover a radius of 2-5 miles of varied terrain with diverse flora. Different plants will be in bloom at different times, and the bees always know. If they live near a field of clover, or an apple orchard, when those bloom the bees will be all over them, as they are great nectar sources as well as being agricultural crops that happen to require pollination. From several to a few dozen other hives overlap in radius, and if things get overcrowded a hive will swarm and find somewhere else to live.

So, what about those commercial beekeepers’ bees, who are dying off in droves, threatening the beekeepers’ livelihoods and the pollination of major crops? This is a very different picture. First off, these bees are industrially co-opted pollinators; no one cares about their honey production. In fact, they may end up getting fed quite a lot of cheap HFCS – yes, the dreaded high-fructose corn syrup; it’s not good for bees either – because they’re moved around so much that they don’t get to make much honey. By the way, several of those crops that rely on insect pollination are not great nectar suppliers. Ever heard of cucumber honey? Blueberry honey? Didn’t think so. In their normal life, the bees would pollinate these plants for sure, but it would be just a few here and there as they gathered most of their nectar from richer sources. They don’t get much chance to do that in a field of cucumber plants.

In other words, these bees are being made to do something that’s secondary for them, and their access to nectar and pollen sources is restricted to monocultured plants that are poor suppliers. That smacks of imbalanced diet and malnutrition before we even think about what might have been sprayed on those plants.

These bees are moved around by the truckload. There are two things very wrong with that picture. First off, bees don’t naturally coexist by the truckload. When they’re forced to do so, they face the same problems that humans face when overcrowded: greater risk of infections, competition for resources, and even wars (I’ve seen a hive half killed by its next door neighbor in what was an extremely minor overcrowding situation in comparison, but soon after pesticide was sprayed nearby). Second, bees are naturally fine navigators, and they find their way based mainly on visual cues from their surroundings. This is why hives need to be moved at night, so that bees can rebuild their navigation in the morning. If you move a hive during the day, the bees who are out foraging won’t be able to find it when they return.

Commercial bees are trucked by night from one farm to another and may travel thousands of miles during the pollinating season. Aside from the sheer number of hours on rumbling, diesel-spewing trucks that represents (and it’s well known bees are sensitive to vibrational noise, and who isn’t sensitive to benzene fumes?), this means the bees are constantly having to reorient, to recreate their bearings so that they can return to their hives, in different microclimates and conditions. Can we say stressful? You might hope that this movement to different farms in different places stands in for the seasonal variety bees would normally get staying in one place; unfortunately, it doesn’t.

The bees are moving from one monocultured farm, with a field consisting only of cucumbers, any weeds sprayed out, to another similarly whitewash field this time consisting of cranberries. Again leaving aside the potentially harmful pesticide exposure and the fact that these are not really food plants for bees, the lack of diversity in the offered diet is a problem in itself. Bees are known to gather selectively from a diversity of plants that serve as their medicines, also sources of the resins they use to build propolis, a wonderful medicine for both bees and humans, which seals their hives and protects against invaders. You can’t – a bee can’t – make propolis out of cucumber flowers either. When beekeepers complain of losing up to 30 percent of their bees when they load up the trucks and move on, I have to say it’s hardly surprising.

It’s worth watching Adya Beasley’s short documentary, On the Brink, told completely from the beekeepers’ perspective, for an overview of the situation. 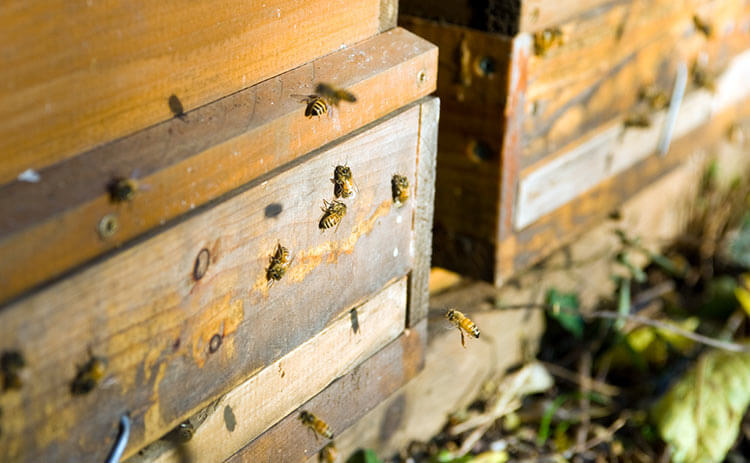 Basically, these bees are being treated like commercial farm animals – and commercial monocultured plant crops, for that matter – and are getting the sorts of diseases that come with the territory. Increasingly, beekeepers are treating their bees with antibiotics preventatively, just as feedlots do with cattle and pigs. And if those bees get transferred to honey production because farming them out to pollinate isn’t paying the bills, those antibiotics will be in the honey.

As for the chemicals sprayed on crops, it’s long been claimed, including by many beekeepers, that Roundup is safe to use around bees. Since it’s an herbicide, not a pesticide, and since it rapidly dries off of the leaves of the targeted plant (which is often dandelion, an important nectar source for bees), it’s not supposed to cause any trouble. However, Roundup does affect animals and humans in the reproductive hormones. And if the bees are exposed, and it ends up in honey that people eat, wouldn’t you say that’s a problem? But a newer study out of the University of Buenos Aires has shown that Roundup does negatively impact bees. Add to this the thought that, leaving aside whether or not GMO crops are harmful to bees in and of themselves, the main point of genetically engineering field crops is to make them Roundup-ready (to enable spraying of herbicides in much greater quantities without harming the crop itself). More pesticides on the fields can’t be good for the bees.

Once again, it’s a problem of mass production, monoculture, industrialization.

Is it as bad as they say it is?

There are several disaster memes making the rounds: All the bees will die and Whole Foods will lose 52 percent of its inventory. All the bees already died in China, so all the pollinating must be done by hand there. No honey left to bury with our pharaohs; we’ll have to make do with GMO high-fructose corn syrup.

But in fact, the true picture is less dismal. Let’s start with China. The truth is that up to 50 percent of farmers in China have beehives. There are many reasons and contexts in which hand pollinating is more practical or otherwise preferable, sometimes including availability of bees, often including pollination requirements that are somewhat tricky, for example because male and female flowers are simultaneously viable only during a very short window. This article gives a great explanation of the issue and lays to rest the scare story of China without bees.

The use of humans as pollinators points out another oversimplification in the “bees dying” picture. Honeybees are not the only pollinators! In fact, there are thousands of species of bees, some social, some solitary; and beetles, butterflies, bats, birds and ants all also function as pollinators. Usually each species pollinates specific plants to which it’s habituated, but this is fluid. For example, vanilla growers on Hawaii hand pollinate because the native pollinator isn’t present there and another hasn’t been found to take its place. On the other hand, there are no fruit bats in the Hawaiian islands, which are the usual pollinators for durians. But one day I climbed a durian tree, paintbrush ready to pollinate the flowers, and I found a great line of large ants had beaten me to it and were pollinating away.

It is also true that many species of bees and other insects have become extinct, in many cases due to pesticides, destruction of habitat and other correlatives of industrialization. So in pointing out that honeybees are not the only pollinators, I’m by no means dismissing all of those problems. 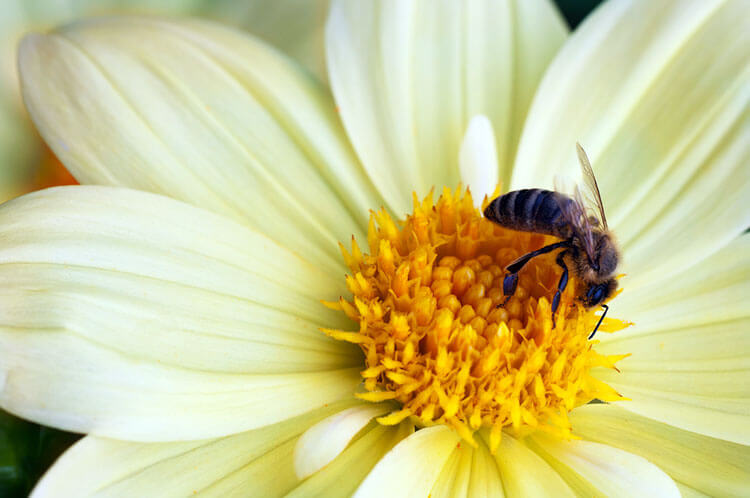 The Varroa mite, and what the bees need…

The Varroa mite became a big-deal killer of bee colonies in 2006, right around the time the term Colony Collapse Disorder was coined. It is a parasitic mite that attaches to the larva and basically sucks the life out of the developing bee. Some wild populations resist it, but many succumb. The tamest-of-tame commercial pollinator bees, overcrowded, lacking a good food supply and their medicinal resin sources, die in the thousands of hives from Varroa mite, which also weakens them and further increases their susceptibility to other pathogens.The Varroa mite has reasonable claim to be a major cause of Colony Collapse Disorder. But I need to emphasize, the weakened commercial bees are also particularly vulnerable to it.

Many beekeepers in the southwestern United States have let their hives “Africanize.” Africanized bees are feared for their aggressiveness, and these beekeepers admit that their bees are testier than the docile European breeds, but they say these bees also produce more honey, and they’re able to remove the mites from themselves and are generally more resilient to disease. It’s like they are wild bison compared to domestic cattle.

Obviously, any time you keep bees in a hive, you’re domesticating them to some degree. But bearing in mind the radius they travel, only 2-5 miles, it should be possible to locate them away from any spraying of poisonous chemicals, and also away from potentially sick commercial hives. If you have a backyard hive, there are many things you can do to keep your bees healthy, primarily ensuring their access to diversity of plant forage.

As for the commercial pollinators, I’d love to think it might be possible that their operations could be planned in a way that’s healthier for the bees. Why truck hives up and down the country, when you could leave hives in situ to pollinate the cucumbers but then visit clover, dandelions, etc., in nearby fields to produce honey? Having fewer hives more widely spread would at least reduce the problem, and would mark a return to something more familiar and natural for the hive organism. Backyard honey makers would also be spared the negative impacts of encounters with sick and enslaved bees.