Green, black, oolong, peppermint, chamomile… We are a society of tea drinkers! And that’s a good thing, not just for our taste buds, but for our overall health.

Tea lovers, particularly in eastern cultures, have been touting the benefits of tea for centuries, from health benefits such as allergy relief, reduced headaches, and improved sleep, to emotional benefits such as lower stress levels. And with so many varieties of tea to choose from, almost everyone can find a flavor—and result—to enjoy.

Concurrently, as consumers have been tuning into the importance of gut health and probiotics, market demand for probiotic teas has increased.

But what exactly is probiotic tea, and how does it benefit your overall health?

Below, we’ll answer all your questions about probiotic tea, including what’s in it and how it can support both the digestive system and immune health.

What Are Probiotics & Your Microbiome?

When most people think of bacteria, they tend to associate it with dirt and germs. Bacteria = a cold, food poisoning, or worse. But that’s a rather incomplete rendition of the total bacterial picture.

Many bacteria are “good” bacteria and are crucial for your overall health.

Your body naturally contains both types of bacteria: good bacteria (known as probiotics) and bad bacteria (known as pathogens). These microorganisms live on your skin and in your mouth, nose, throat, eyes, bladder and genitals. They also colonize your gut, and live together in a delicate balance, forming what’s known as your gut microbiome (where all the microbes living in your gut are housed.)

To achieve optimal gut health, beneficial bacteria have to be present in greater quantities than your bad bacteria. When this occurs, your gut microbiome will be functioning at its healthiest prime, boosting your immune system and contributing to your overall health.

When your gut microbiome is out of balance, the bad bacteria will outnumber the good bacteria. This imbalance, known as dysbiosis, can occur in one of two ways outlined next.

Bad bacteria can enter your body through a number of different ways. The most common is through a slight cut or scrape on your skin or through your mucous membrane. Once it’s in your body, if it’s not properly addressed, it can multiply and eventually overpower the good bacteria.

The most common cause of a lower number of good bacteria is taking antibiotics, which kill both types of bacteria. However, the bad bacteria will flourish more quickly, giving it a stronger foothold in the gut than the good bacteria.

Diets high in processed food and sugar can also have a negative affect on your good bacteria, reducing both their numbers and strength.

But regardless of the cause, this imbalance in your gut microbiome (known as dysbiosis) can lead to infections and illness. When this occurs, the best way to regain your gut health is by adding probiotics into your diet with probiotic foods and supplements.

Probiotic-friendly foods are a great way to boost the amount of good gut bugs quickly and efficiently. Traditionally, this has called for fermented food and drinks such as yogurt, kimchi, buttermilk, and pickles.

Probiotic teas are one of the newest and healthiest options for adding beneficial bacteria to your gut microbiome. 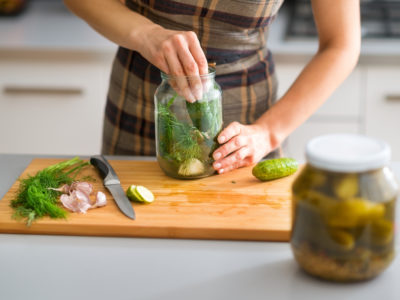 What Is Probiotic Tea?

Probiotic tea is regular tea that has been infused with strains of beneficial bacteria and then given time to ferment. The most common of these is kombucha probiotic tea, although there are some newer varieties available that we’ll discuss below.

When consumed, kombucha or any other probiotic-containing tea boosts and strengthens the quantity of beneficial bacteria contained in your gut microbiome.

Kombucha is a fermented tea that has been consumed by many for its health properties for a long time. Because it is easy to brew, kombucha is one of the most popular probiotic teas. In its purest form, the only ingredients used to make kombucha are:

Once the mix is created, it is covered and set aside for at least a week. During that time, the yeast and sugar combine to produce alcohol. Bacteria (present in these ingredients or pulled in from the surrounding air) feed off the alcohol and create acetic acid (also found in vinegar) in a process known as fermentation. This also releases gases into the compound, causing the mild carbonation—the fizziness—found in kombucha tea.

During the fermentation process, a large amount of beneficial bacteria grows in the tea. This is mostly lactic-acid bacteria, also known as Lactobacillus, and it’s the probiotic found in yogurt, kefir, miso, and more. The presence of this good bacteria transforms what might have been a standard black tea into probiotic tea.

Kombucha tea, on its own, has an earthy flavor. Since this might not appeal to everyone, manufacturers often add fruit or other natural flavors during the fermentation process. And although kombucha is traditionally made with black tea, it can just as easily be made with green tea instead.

Interesting kombucha fact: The combination of yeast and bacteria in kombucha eventually form what can only be described as a blob – a thick gelatinous layer floating in the mixture. This is the SCOBY (Symbiotic Colony of Bacteria and Yeast) and can be removed and used to ferment a new kombucha. A SCOBY is the probiotic gift that keeps on giving!

Kombucha is the most common probiotic tea, partly due to its temperature. It is kept refrigerated, which allows the bacteria to survive and live happily. Hot teas infused with probiotics have historically not been as shelf stable because even low heat (as low as 140°) can kill probiotics.

However, this is changing. Research breakthroughs have proven that a particularly robust strain of beneficial bacteria, Bacillus coagulans, can be added to boiling water without losing its gut-boosting benefits.

Even the popular Bigelow tea brand is getting in on the action. The Bigelow probiotic lemon ginger tea includes Bacillus Coagulans GBI-30, 6086. According to a case study by GanedenBC30®, the “spore-forming nature [of this strain] makes it the only probiotic that survives rigorous mixing, baking and manufacturing processes such as high pressure, high heat and freezing conditions—and yes, even boiling water.”

A Proven, Potent and Effective Spore Probiotic to Help You Feel Your Best

Just Thrive’s® breakthrough, award-winning probiotic contains the proprietary strain, Bacillus indicus HU36® which produces antioxidants directly in the digestive system where they can be best absorbed by your body. The spores in Just Thrive—including Bacillus coagulans—have been successfully used to enhance digestive health in the progressive health and wellness space for more than 50 years.

Green tea, which can be sipped as a hot or iced tea, is also a popular choice for probiotic tea. It is often an alternative for the black tea in kombucha. A trendy kind of green tea is matcha. Matcha does have more caffeine than regular green tea, and many people have recently been substituting it for coffee. 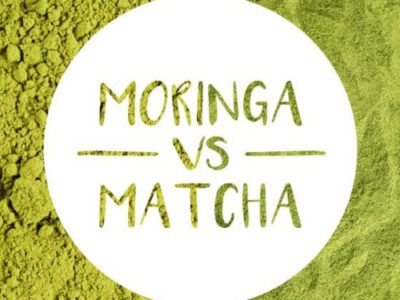 The Battle Of The Greens: Moringa vs. Matcha

Some super greens are worth drinking, but when it comes to moringa vs. matcha, which is better for overall health and wellness? Find the answer below!

Read moreThe Battle Of The Greens: Moringa vs. Matcha

Incredibly, about 70-80% of your immune system is housed in your gut. So, when beneficial bacteria thrives in your gut microbiome, it not only leads to a healthier gut, it also leads to stronger, more resilient immune function.

The immune-boosting effect of supporting a healthy gut with probiotic tea can help you reduce the symptoms of illnesses and infections, and recover more quickly when you do get sick.

And, you can stack your  health benefits by fusing the beneficial probiotic bacteria with  green tea. It has an added power player: polyphenols. These are bioactive compounds that occur naturally in plant-based foods—in this case, the green tea leaves. Polyphenols act as powerful antioxidants, fighting off harmful free radicals and protecting your immune system.

Other varieties of probiotic teas include herbal teas that offer benefits that vary according to their ingredients. For example, a lavender probiotic tea will have a calming effect, boost sleep, improve mood, and may help soothe stomach ailments.

As a disclaimer, there are some negatives to probiotic tea. Some probiotic teas do contain caffeine. Although these are not found in as high of a concentration as coffee, it is still something to monitor. Excess caffeine can cause insomnia, headaches, dehydration, and other symptoms. 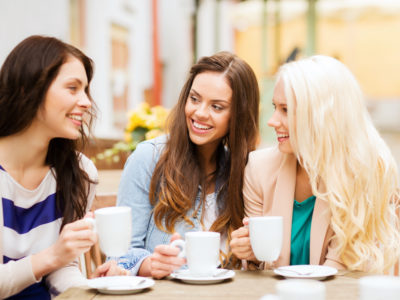 Increase your energy levels throughout the day with these caffeine alternatives. As an added bonus to drinking less caffeine, these substitutes have plenty of added health benefits that might make you think twice next time you reach for another cup of Joe!

Due to its popularity, there are many recipes for probiotic tea—especially kombucha—available online. You might be tempted to brew it yourself, or try it from friends who do. If you do drink a home-brewed kombucha, beware of the brewer. While kombucha is the perfect breeding ground for good bacteria, in the hands of an inexperienced brewer it can also be the breeding ground for bad bacteria.

High sugar content can also be an issue with probiotic teas. Because of their strong flavor, manufacturers often add sweeteners to the tea to make it more tasty to consumers. Sugar is not a gut-friendly food, and too much of it will counter the health-boosting benefits of probiotic tea. And, sugar spikes can disrupt your immune system, making it more difficult for you to ward off illness or infections.

Drink up! Probiotic tea is a highly effective way to supplement the beneficial bacteria in your gut microbiome and boost your digestive health and immune system. And tea will bring its own beneficial properties, making this a powerful wellness option.

For optimizing your gut health and improving your immune response, probiotic tea is a tasty and efficient solution. 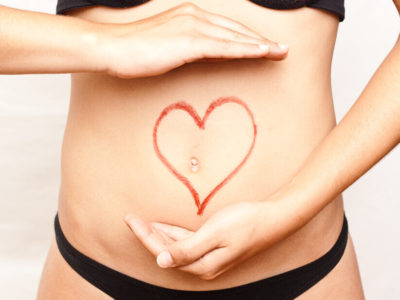 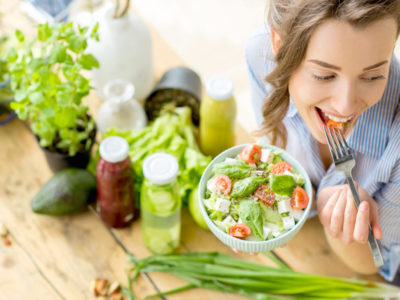 10 Foods To Add To Your Microbiome Diet